First of all, check out this map that I found on one of the myspace discussion groups. It is not our line, but funny:

Anyway, a new Monmouth University/ Gannett New Jersey Poll was just released today asking people the North/South/Central Jersey question. It is definitely worth checking out, but I must say it humbles me.

It took me months to get people in every county to draw lines on a map . . . . and then begging them that middle schoolers would also get a learning experience out of it. Otherwise, people would give me dirty looks on the streets of many towns (I would have given myself a dirty look too). Oh well, if all of you go see the film (we will released details on this blog) then maybe I'll have some money to be able to do fancy polling like that! But it is broken down pretty well.

We do have our own county-by-county results; it is detailed and it was many, many miles of driving (I promise, environmental lobby, that I'll buy carbon offsets eventually). A lot of credit goes to the kids for taking all of my data, tallying the results, graphing and showing patterns. Again, our info will be available when the film is released.
Posted by Steve at 8:35 PM No comments:

Most people think The Boss did this (he does cover it live), but it was actually written by Tom Waits. Here is Bon Jovi's cover: 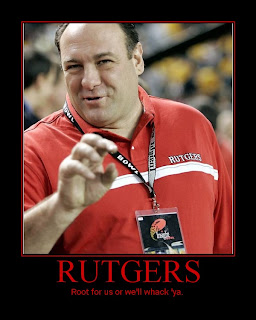 Hey all, thank you for your emails, comments and posts to Kelly's blog. We have been overwhelmed by the response and positive feedback.

Just an important note: to those worried about Central Jersey, we understand - but feel that you can take statistics, interviews (and gut feelings) and side every town in New Jersey either North or South. We have tried to treat it with care and talked to a lot of historians, but it's not scientific.

For at least the next month I am planning on posting a different "dividing line" map a week. Here is New Jersey split by distance in miles from the centers of Manhattan and Philadelphia. It is my friend Bob's map from West Jersey.org and (as you can see) he uses the 8 southern counties as his definition. 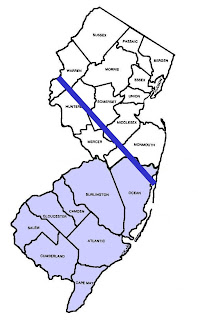 Even after our film - the debate should NEVER end. It's fun water cooler discussion and should always be. It has been difficult - there have been many times that I asked my co-directors, "Well maybe we can just leave the question open at the end of the film?" They reminded me that we promised people a line so we have to give them one.

You will see two : our line based on our research and the "People's line" that Kelly mentions in her blog. We will also post dates here when the film will be showing in your area. And yes, most importantly, we'll answer the question, "What unites us?" at the end of the film.
Posted by Steve at 2:06 PM No comments:

Go to New Jersey: The Movie
Trailer made by See All Productions.
Posted by Steve at 7:43 AM 1 comment:

With the Jersey Shore Roller Girls

With the Jersey Shore Roller Girls in Asbury Park at Convention Hall.

Also check out one of our favorite Jersey bands - Echo Movement.

Dividing the State by bottlenecks

Below are maps matching the Turnpike bottleneck with Parkway bottleneck theories 2 and 3 - see below the pictures for the theories. I drew straight to the Delaware River and Ocean from their dividing points and tried connecting them at even locations . . . but as always - you debate. Either email me or post a comment. 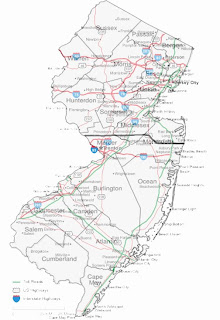 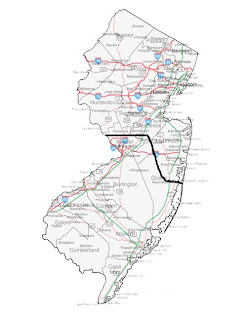 MANY people have theorized that North and South Jersey can be divided simply by looking at the bottlenecks on the Turnpike and Parkway. This is easy to do on the Turnpike - the truck and car lanes happen right around exit 8A in Cranbury. (Notice the traffic approaching this exit in the picture? Pretty typical). However, it is more problematic on the Parkway. Around its central part, it spilts 3 times. If you were going South, the 1st time is:

1) In Sayreville right after the Driscoll Bridge. It is where the parkway divides into express and local lanes. This is a BIG divider to people from North Jersey. But I will not use it here. This is because of the bridge's importance: it has its own theory entirely, which also includes the Raritan River.

2) In Tinton Falls around mile marker 104, where the Parkway bottlenecks for the 2nd time, this time losing the express lanes (remembering we're going South). If you look at the signs beforehand they actually do say - "SOUTH Jersey" (and NORTH Jersey if you were going North). There is really not a clearer sign marker in the state - the way it is written, it appears as if we're entering two different states.

3) In South Toms River, after exit 80, where the Parkway narrows once again, this time to only two lanes. If you get by this part without hitting traffic - you're home free - the rest of the Parkway should be a smooth ride (well except Friday nights and Sundays in the summer). Important note as well: The Pinelands National Reserve also begins right around this exit.

Sure they are talking about extending more lanes south of exit 8A on the Turnpike and putting more express EZ Pass lanes south of exit 80 on the Parkway - but for now - these are major dividing points because once you're south of them, traffic is easier. So next time you're making that drive, after you get past those bottlenecks - take a deep breath. You beat the traffic and just crossed into South Jersey if you're going by our "Bottleneck theory."
Posted by Steve at 5:57 PM 1 comment: 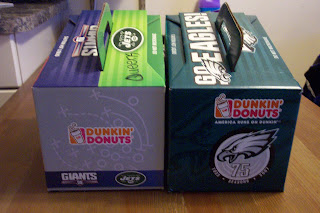 For a while now, you probably have seen the "Box & Cup of Joe" available at Dunkin' Donuts which featured NFL football teams as the designs. What you may not have known, though, is that in the State of New Jersey, your box will be different depending on what county you happen to be in. Some counties have Philadelphia Eagles' boxes and some have combined New York Giants & Jets' boxes.

Every county's seems to be uniform and it appears that Dunkin' didn't divide any county (though a colleague of mine swears that in Phillipsburg, they have Eagles' boxes . . . two phone calls failed to confirm this). It pretty much follows the media market each county tends to be included in: New York or Philadelphia.

It somewhat follows our Sports' loyalty dividing line (you'll have to see the film for that), but we do have a message for Dunkin' Donuts: People prefer choice. In Princeton and Manahawkin, we have met plenty of people near these "border lines" that can't bear to drink out of a hated team's mug or box. Don't know how cost effective it would be offering a choice, but Dunkin' would have happier customers, surely.

Here is the dividing line in the state based on where you would have found the NFL Box & Cup of Joes. Red indicates Philadelphia Eagles' places and Blue indicates: New York Giants and Jets. 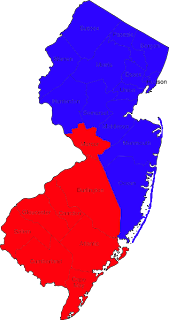 Warren County - one of our most interesting 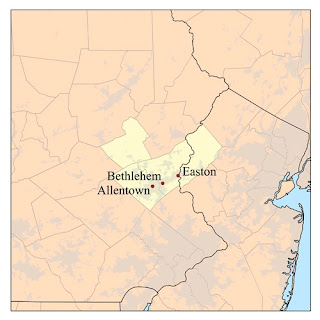 Warren County's proximity to Easton, PA and also the Philadelphia Eagles' training camp in Bethlehem on the campus of Lehigh University makes it weird as far as it being a Northern New Jersey County. Some people call it a hoagie, and you'll also find Pork Roll on the menu (and not Taylor Ham) at most diners.  .  . . . not to mention a good amount of Eagles' fans.

Well, read this article on the change in demographics over the years in this area known as the Lehigh Valley (it also includes the PA side). 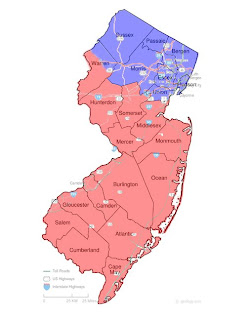 From my travels, this is the map of where people in New Jersey use the terms: "Pork Roll" (RED) and "Taylor Ham" (BLUE).  It is still up for debate - and I pretty much followed county lines on this one (except Warren), but I believe it to be pretty accurate.
Posted by Steve at 9:06 AM 3 comments:

Is Readington - the site of the "Penny Protest," in North or South Jersey? 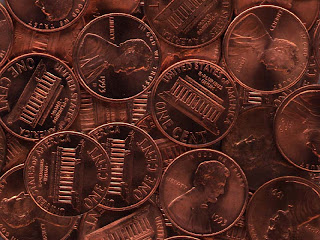 Everyone knows about the Penny Protest in Readington by now and I will not get into the politics of it at all. But I have just one (very predictable) question. Is Readington in North or South Jersey?

I ask this because I first saw the story linked on Drudge to ABC 6 Action News in Philadelphia. It appears that they got there before the New York bureau. But logging on to the sites today, you can see that the Philly's online video coverage has been replaced by New York's.
If you look at the channel lineups for basic cable in Readington, they only get one Philly station for local news, FOX 29, who posted the story 17 minutes before their brethren at FOX 5 in NY.
Both NBCs either ignored the story or it isn't available online at this time.
Finally, both the Philly CBS 3 and the NY CBS 2 have the same times logged, but the New York version of the news appears on both sites.

So, what am I saying?

Well, if you're going by the Cable TV theory, then it appears Readington is in North Jersey (Getting all of the New York stations and only one from Philly, two if you count CW Philly).

But Philly's foray into this area was interesting. It appears that the Philly stations may have been on this story first, but backed down because it wasn't their territory. And the NY channels get to keep their reporting online, even though Philly got their quicker, supposedly. Would love to hear anyone in the media industries' comments or emails about protocol here. . . I mean there's probably some agreement that I don't know about. But, it's weird, because the students and parents weren't going to be able to view their own Philly interviews at all.

Similar things happen in Toms River, where the Philly bureau covers them more, but most residents that I spoke to watch the New York news. Many only turn on the Philly stations for the weather.

To make things interesting, Readington is also very close to the most northern Wawa in New Jersey.
Posted by Steve at 9:03 PM No comments: