The Battle for New Jersey's Soul 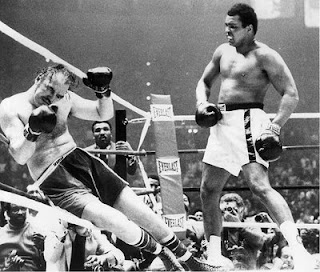 Look at Muhammad Ali hammering Chuck Wepner and you get an idea of what the media has done to New Jersey. The Bayonne Bleeder withstood a lot vs. Ali and even knocked the champ down during the fight, but for a more apt example, imagine if the media was Mike Tyson and New Jersey was Michael Spinks. That quick knockdown is what it's been like for New Jerseyans to defend against the media onslaught over the past decade.
The initial punches for this generation were The Sopranos. But it got a pass from many because it was fictional, well-written, on HBO and artsy, even though the opening credits were jabs to the gut. Then came the uppercut to the jaw, MTV's Jersey Shore, followed by the roundhouses: Real Housewives, Jerseylicious, & Jersey Couture. Everyone across America was watching the fight and the world viewed via satellite TV. Even Iranian secret agents who tortured dissidents were enamored by what they saw as exciting - fast forward to 42:25 to see.
But now comes a new round in the larger heavyweight fight. If you were on vacation, Snooki from MTV's Jersey Shore made $32,000 speaking at Rutgers University recently. Here were some students' reactions:
Snooki's Rutgers Appearance Raises Eyebrows
The story blew up because it was slightly more money than Noble & Pulitzer winning writer, Toni Morrison will make at commencement. (Although according to nj.com, Snooki's fee was split some ways by related parties). Some initially feared that Idiocracy was upon us; others noted she was a cheaper alternative to many higher profile and more expensive acts. Writers may have hopped on this bandwagon because local stories dried up; some are tired of it already. But it's significant. It matters because a punch has been thrown back.
A facebook event has been posted to counter Snooki's appearance and get The Boss to return to Rutgers after a very long 30 plus year hiatus. Additionally, a petition (that lacks the political overtones) was started.
If Springsteen comes to Rutgers, it would be bigger than just vindicating the University's image post-Snooki and after the tragedy of Tyler Clementi. It could be a winning round on the scorecard of a losing fight. It matters because what's going on at Rutgers could be a microcosm of New Jersey's overall pulse. Social media is being used to galvanize the grassroots and counter the media who have for so long used us as their punching bag.
Maybe Bruce will come. Maybe he'll play and not be political about how this came about (unlikely for The Boss these days).
But let's not underscore this: timing is everything.
The New Jersey-themed reality shows are mostly petering out. Their 15 minutes are up. Even Jersey Shore, a show that has staying power and whose cast just got big bonuses, is rumored to be ending after season 4. People will forget the shows, but the stereotypes will live on. A show by Bruce Springsteen on the campus of Rutgers would represent New Jersey fighting back, while these shows are still relevant to many.
Jersey guy Chuck Wepner went to round 15 with Muhammad Ali and became the inspiration for Rocky. We're calling for you Bruce. Make this matter.
Posted by Steve at 7:55 PM 1 comment: