Success has followed us as we have been accepted and shown our film at 3 NJ film festivals: Wildwood by the Sea, where the film won its first award and was categorized as "must see", Reel Jersey and NJ State Film Fest at Cape May and are awaiting word from others, including national ones.

However, we (like many of you) are in pretty deep financial debt. We still need a good chunk of change to clear music, pay the bands & copyright things. If fans ever want to see the film on DVD, we need a Christmas miracle of sorts. Well, I won't get that dramatic.

We have decided instead of waiting for every NJ film festival, that we will go around the state and book short screenings at local eateries, pubs, playhouses, which ever place it works. One of these independent screenings will be on Tues. March 31st at the Ocean County Library. These will allow us to sell our t-shirts (you can also buy them online), mingle with you guys, get your feedback and hopefully raise some dough.

The question is where do you want the next screening? . . . (around the time of January or February) Vote above and we'll let the fans decide!
Posted by Steve at 8:12 AM No comments:

Preview: some of the bands in our film

One of the bands that we included in the film is, Save Pluto. They competed in a battle of the bands of sort on G Rock Radio and we at NJ: the movie spent a lot of time looking at these bands, especially because most had Jersey roots.

These guys were a definite favorite, and there wasn't many the crew here could agree on. But these guys rocked and were a group who we saw as an up-and-coming band. They stood out from many of the others in the competition. And - they just signed a publishing deal too - so I guess we have good taste!

Anyway, see an interview they did beforehand:

by the way . . . we are not putting this song in, but "Impressed" which you can listen to at their myspace site. The lyrics "are we ever going to get together" had some meaning from my point-of-view on this film . . but anyway, enjoy!
Posted by Steve at 8:58 AM No comments:

Amen. Alleluia, praise the lord. I've ranted on this enough. Kevin Smith has said that he doesn't get anyone who doesn't root for the Devils if you live in NJ. Read the Yahoo Puck Daddy Blog here. . . it is worth while if you love Jersey and especially hockey as well. 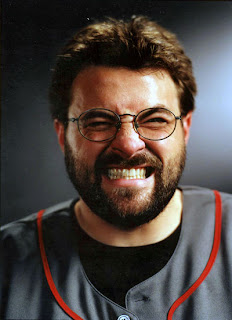 I will summarize my feelings shortly below:

My father was a Reds' fans and my mom as Cubs' fan - because my dad was from Southwestern Ohio and my mom was from a suburb of the Windy City. Jersey doesn't have a baseball team - so I rooted for the Phillies. I threw my dad's Reds cap out at 4 (when we lived in Ewing) and put on a Phillies' cap - because that was the closest city to us.

Jersey HAS a hockey team and appropriately, I'm a Devils' fan since I have always lived here. My dad and I agree on that (he's not from Columbus). I'm 31, and was 11 when the Devils made their playoff run in 1988.

Ranger fans are allured by the city - pure and simple. The parent argument (like, my father was a Ranger fan - so I have to be) doesn't stick to me for the reasons that I mentioned above. I just tell the Ranger fans who live in NJ (and more importantly grew up here) to remember your Jersey blood when the New Yorkers laugh at you as you board the NJ Transit back to NJ.

My whole point is that I DON'T see how anyone born or raised in NJ UNDER the age of 35 can be a Rangers' fan (with the exception of South Jerseyeans who are Philly fans and can't get the Devils on TV). The Devils were already here. And a Jersey team should be enough . . . especially with 3 recent Stanley Cups! Kevin Smith has come out and said it . . . why can't we all?

Well, up next for me, I'm in the process of creating a joke blog on how we can help our brothers and sisters in NJ, who happen to be Ranger fans, ease their transition . . . and offering them moral support . . . .in their eventual move to New York. That's right, I said it.

DMV links, bridge toll & parking information . . . and even links of reliable movers. Everything to help our dear friends move to where their heart really is - NYC. . . that's why I've been gone from blogging so long, but Devil fans - look at it as a Christmas present coming soon. 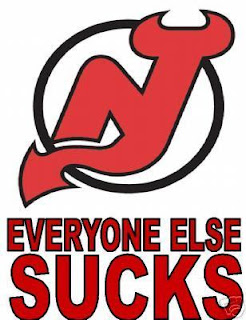 We just got our t shirts yesterday and are SOOO excited! FRONT: 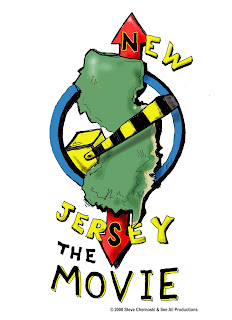 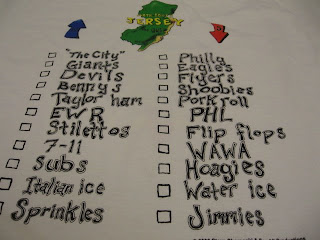 You can use a sharpie (but we recommend a fabric marker) and check off how North or South Jersey you are! My marks are NOT consistent at all. . .

Anyway, you may purchase these at this link, using Pay Pal, which if is safe and secure. The shirts are $12 and shipping and handling is $3.50. We are personally shipping to you ourselves, to cut our costs (so you may write me a badgering email if you don't get them in time). We really went out there to try and raise more money and the shirts are AWESOME . . . . so please click below. Thanks to Jason Higgins for helping me set this up!

http://nsjersey.synthasite.com/
Posted by Steve at 4:00 PM No comments:

We got into the New Jersey State Film Festival at Cape May! Saturday November 22nd at 2:15pm in Theater C at the Beach Theater at 711 Beach Ave Cape May, NJ.

To buy tickets - your options are here 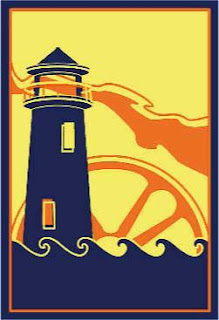