How New Jersey is viewed by America . . .

. . . AND why I think the most underrated reasons people specify they are from SOUTH or CENTRAL or WEST Jersey is because of these:


I'm getting some North Jersey friends on this for some defense.
Have a good time down the shore this weekend!
Posted by Steve at 10:47 PM 3 comments:

To find out more about the housewives, click here.
Posted by Steve at 6:55 AM No comments:

New Jersey was once divided into East Jersey and West Jersey, as I have discussed here before. That eventually evolved into North and South Jersey. But in the early years of our republic, this divide was quite apparent when it came to slavery.
Taken from http://www.westjersey.org:
1) The slavery rates were much lower in South Jersey during the first three generations of the life of the nation (1790 to 1860). At the beginning of this period 92.6% of New Jersey's slaves were in the northern counties. By 1840 it was over 99%.

2) The 1860 popular vote for Lincoln in the Southern Counties as a whole was 55%, but was only 45% in the Northern Counties.
So although some people like to take the Mason Dixon Line and extend it across South Jersey, this early divide was really a kind-of-reverse Mason-Dixon Line.
Why was this? Too complicated, I would recommending further reading the linked westjersey.org site to get the answer.
But there will always be "Central" people trying to dispute that history. It all reminded me of the below clip, which inspired this post:
The above video takes about 4 seconds to begin playing.
The full above episode can be found at: http://www.hulu.com
Posted by Steve at 2:05 PM No comments:

We are very happy to announce that New Jersey: the Movie has been accepted to the 2009 Hoboken International Film Festival.  Details to come soon.
Totally off the radar, but of interest, an article that I read this morning has to do with the town of Baarle-Nassau/ Baarle-Hertog.  It lies within the boundaries of the Netherlands, but because of a history dating back to feudal customs of the Middle Ages, the borders of Belgium and the Netherlands zig-zag through the area.  It makes New Jersey's divide pale in comparison!  Many of the borders even go through houses and bedrooms!  Click on the picture to read the article. 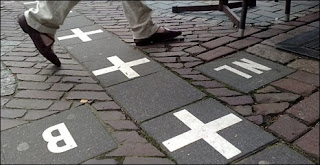 The above video takes about 5 seconds before playing.
Posted by Steve at 9:02 AM No comments: