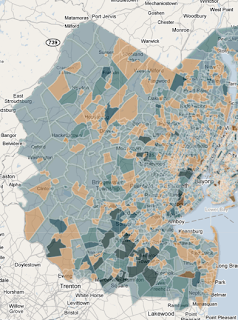 I've been eagerly awaiting the 2010 Census numbers for a while now.

Public radio station WNYC has released some census maps, including racial demographics and population changes from 2000 - 2010. I took some screen shots of the the population change map, but of course, I was more interested in focusing on how the New York based radio station divided New Jersey.
Did they divide it based on where their listening audience is?
Where the fringe signal reaches?
Where the census divides New Jersey?
I really don't know. 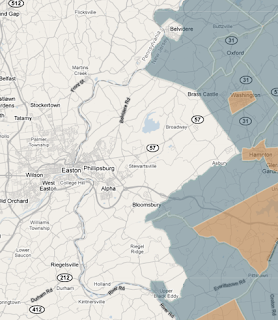 But I did notice some interesting patterns:
They left out the Lehigh Valley area of New Jersey that we focused on heavily in New Jersey: the Movie. In the film's extras, we interviewed a friend Doug, who grew up near Belvidere and both owners of Gunnar's Landing. You can see the newest interview of Gunnar's here.


Finally, my hometown of Ewing gets split by this map. Actually, it splits Mercer County and Monmouth County. The significance of this: it is exactly where our People's Line (detailed in the film) goes through.
But surprise: no Ocean County.
This all makes me wonder if Ocean County will continue to be counted as part of the New York metropolitan area in the new census or if it will become something else . . .

Anyway, I hope to post more as the new census numbers creep out.
Posted by Steve at 9:15 PM No comments: