For a yet-to-be-released article (or maybe it will never be written), I was asked to comment on the differences in style between North and South Jersey.
This, from a guy who prefers hoodie sweatshirts & sweatpants in the winter and lives by cargo shorts in the summer. However, I did have an opinion, even though you can't put clothes on my observational skills. But it couldn't be done in two. So the map I made looks like a frankenstein NJ assortment of style classifications. Let me explain. 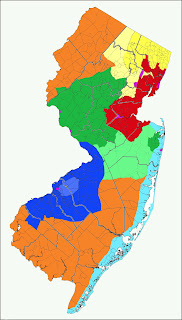 1. Bergen Posh is in YELLOW is all it's own. The people here emit a certain amount of confidence in themselves that you won't find anywhere else in the state. To most New Jerseyans, Bergen County is a different world, but ironically, it's dominated media depictions of us for so long. This is Real Housewives territory, but there is more to it than that. Not everyone has the stereotypical big Jersey hair here, but it definitely exists in large quantities. Being underdressed is not something I would advise on a weekend night. Style is very important and a reflection of your privileged status. You'll find hoop earrings, stilettos and BIG handbags. It's a populous place & pretty diverse; there is the GTL group, but also many golfers. I'm mostly referring to Northern Bergen County and some parts of Passaic & Morris. Because "Bergen is Bergen," it emits its culture to neighboring areas. It continues to a lighter degree in Morris, West Essex & West Union (you can see the change in shade) where many of those suburbanites are transplants from somewhere else. This is what people in Manhattan think Jersey is like.
2) Horse Country Prep GREEN - Hunterdon, Somerset, southern Morris, southern parts of Middlesex, & east central Monmouth. northern parts of Mercer (Princeton) and western Monmouth & northern Ocean counties. This is more the prep school look, no hairspray. Major achievement goals for this LL Bean crowd would be to get into an Ivy or similar college, become an Abercrombie model or a professional equestrian. Many here work at pharmaceutical companies too. They know their wines and are well traveled. The Far Hills Steeplechase would be the time to see this group's very style conscious mojo in action. Horse country continues into southeastern Mercer, Northern Ocean & Monmouth, but to a more laid back degree (The green is shaded lighter here).
3) Gateway Urban - RED From the Hazlet & the Brunswicks to southern Bergen County, you're more likely to see makeup, & big hair. This area is close to where Jerseylicious is filmed. The GTL crowd exists in big numbers, but it's also where I think the best food in Jersey is because you have so many newer immigrants. You can go from a Korean BBQ to Indian to Dominican. It's really the best kept secret in all of NJ in my humble opinion. I don't know if you can link cuisine to style, but we have your urban NJ flavor here. Very confident, train-saavy people. Also found in the area of southern Passaic around Paterson.
4) Garage Beachy - Powder BLUE Flip flops in the summer, dark sneakers in the winter. There's a difference between the people that grew up here from the people who moved here from North. Ed Hardy & tattoo sightings are a common sight. This is the epicenter of music in New Jersey, so you have longer hair for guys as well unique combo of the surfer look. This is eastern Monmouth & Ocean counties. My guess is more guys per capita here can play a musical instrument. Atlantic & Cape May counties are even more casual, more jeans and more tattoos, but less musical. Spotting a woman with a handbag down here is less likely.
5) South Jersey style - BLUE Philadelphia suburbs are very much like the Atlantic & Cape May counties (these counties are culturally tied). However in Cherry Hill, Moorestown, Haddonfield & Haddon Twp. you're likely to see a preppier variation (I've colored these a lighter shade of blue), but in other South Jersey towns my experience it's lots of jeans, more likely to see the big hair, more makeup & more people smoking outside taverns. I'm always welcomed here at pubs in my hoodie and sweatpants too.
6) Counterculture/ Bedroom. PURPLE These towns were tough to categorize because there's really two small sets. The counterculture towns include Lambertville, Frenchtown, Collingswood and increasingly New Brunswick & Asbury Park. To a different degree up North: Weehawken, Edgewater, Downtown Jersey City & Hoboken have your bedroom community yuppies (for lack of a better term). Lots of transplants here too. In the Counterculture towns, you're more likely to see styles similar to Brooklynites. Coffee & music are important here. You'll see big hipster glasses, scarfs, and tighter, darker colored jeans. In the bedroom communities, the gyms are packed with transplants who work in the city. Parts of Maplewood, South Orange and Montclair give you the best combo of the two sides here which is why I included them in one category.
7) Exurb Sprawl - ORANGE To use a David Brooks' term, these include Warren, Sussex, Salem, Cumberland, western Atlantic, Gloucester & the Pineys in Burlington & some of Ocean. Very laid back. I've only been to a few taverns out here (check out Millville on 3rd Friday) but it's a VERY low key style. A sweatshirt with work boots should be fine on a Saturday night. I've seen many paintballers here drinking off their wounds. There's a nice lack of pretentiousness and very friendly people.
Posted by Steve at 6:34 PM 2 comments: