My day on the Sports Dividing Line 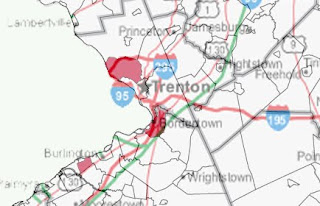 I stopped at 3 bars yesterday during the Eagles - Giants game. The results of what I saw were as unpredictable as the result of the game itself.
My journey started at the Dublin Square in Bordentown. Then, we went northwest to my hometown of Ewing at the Firkin Tavern. Finally we drove south (through PA) & finished at the 45th Street Pub in Edgewater Park. 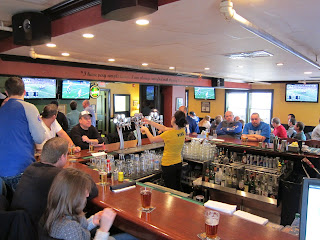 First, I have stated here before that Bordentown, in Burlington County is safely Philadelphia sports territory. I still stand by that. If you were to go to Bordentown High School, it would be pretty evident. However, because Routes 206, 130, 295, 195 and the Turnpike all intersect in or near Bordentown and because the town has three great sports pubs right next to each other, these establishments are often filled with many Mercer and Monmouth County people - which means more Giants fans. This was obvious at Dublin Square, where I counted 17 people in New York gear and only 4, including myself, in Philadelphia apparel. There were others there, including the Boston guy, but it gives you the atmosphere. 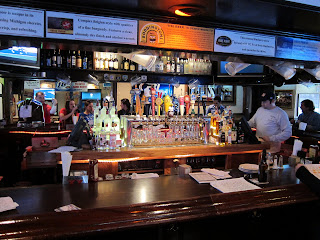 We then trekked to Ewing in Mercer County, which was 6 - 4 Eagles in terms of apparel. But most of the people were Eagles fans. When the Giants scored to finish out the first half, only those four people (pictured) cheered. It was like a funeral in the bar and was a completely different atmosphere from Bordentown. Even though Ewing is further north, it is kind of isolated along the Delaware River if you look at the roads. All you've really got is the Interstate 95's infamous gap to PA and Route 29 to Trenton and Lambertville. The Firkin was an Eagles bar. The four Giants fans also looked like TCNJ students. 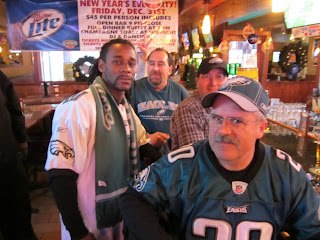 We finished by going 95 South through PA and hitting up Edgewater Park. This was safely Eagles country. There were two loud Giants fans at the bar and that was it. I got some locals to pose for a picture, but this was before the big comeback. They reluctantly agreed, but by the end of the game, we are all hugging and high-fiving each other. It was quite a sight. It was quite a game.
It was quite a fun travel day through the sports dividing line of New Jersey.
Posted by Steve at 7:09 AM No comments:

The opening of Wawa in Parsippany - Troy Hills this winter makes it Wawa's northernmost New Jersey location. It eclipses Phillipsburg, which previously held the title since 2008. 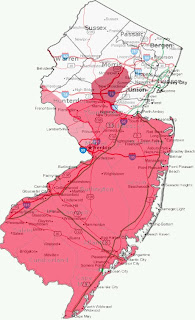 This has created another bulge in the Wawa map. The problem is there are many people in the middle of these two extensions who are still far from a Wawa, thus making the map somewhat deceiving.
Many, like their non-shaded brethren, are hoagie refugees
Posted by Steve at 12:00 PM No comments:

Where in NJ to watch the Eagles at Giants

This Sunday. 1pm. It's the Philadelphia Eagles at the New York Giants.
Most experts predict whoever wins this game will win the NFC East Division title and stamp their ticket to the playoffs. For the other team, they'll likely be looking at the last spot or worse - they'll be out of the playoffs all together. 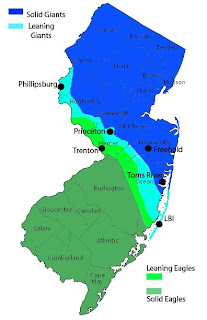 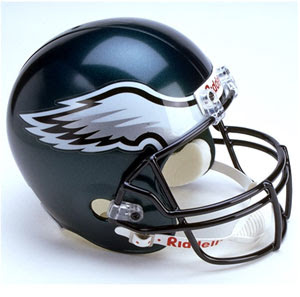 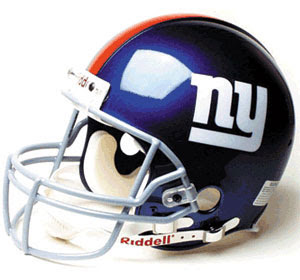 If we follow the New Jersey sports dividing line, below is a list of some bars that will have divided crowds.
So get out the people watching binoculars, get your jersey, pick your side and enjoy this VERY rare occasion. It's too often the NFL schedules these two opponents at night. While it's great for TV at home; it's not the same at the taverns. This Sunday is going to be special.
Get off the couch and out to one the following places this Sunday.
Warren County
Gunnar's Landing - Belvidere
Pinstripes - Alpha
Mercer County
Wildflowers - Pennington
The Firkin Tavern - Ewing
Burlington County
All Starz Sports Pub - Bordentown
Dublin Square - Bordentown
Chickies & Pete's - Bordentown
Ocean County/ Monmouth
Plumsted Grill - on border of Cream Ridge/ Plumsted Twp.
Ocean County
L.A.'s Restaurant- Manahawkin
Doyle's Pour House - Tuckerton
Posted by Steve at 1:37 PM No comments:

It could happen: HS Winter Classic in NJ

It is something that we rarely picture. But could it happen here?

On Sunday, Paul Bruno of NJ.com thought out loud about
holding a high shool outdoor ice hockey event in the Garden State.

Alliance Hockey photo
It is a rare occurence that allows me to write about two of my passions in the same post. As a kid, I skated on a branch of the Assunpink Creek that went through my parents' property. It rarely freezes over anymore, but in North Jersey, especially the Skylands, they get to lace up skates outdoors quite often. Even parts of the award-winning documentary, Pond Hockey, were filmed farther east - in Bergen County.

But where in the state could a game like this occur?

The coldest place in New Jersey of course - Sussex County. And they have two potential venues that would work.

My first thought would be Skylands Park in Augusta. It is home to the Sussex Skyhawks of the Cam-Am League. If you could get Century Link and other sponsors on board, it would be the perfect venue. 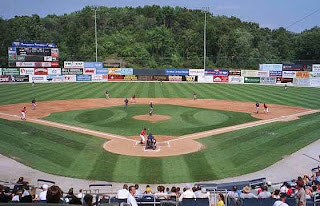 If that doesn't work, I have heard the new owner of Mountain Creek, Eugene Mulvihill, who has a big vision for the resort, could pull it off.

Then, get the New Jersey Devils involved in that Northwest corner that often goes ignored PR-wise (co-owner Jeff Vanderbeek did not stop here on his summer Jersey Tour) and you may have something.

Hot chocolate, revived roasted chestnut stands, a guest announcer like Glenn "Chico" Resch and ice hockey outside - the way it was meant to be played.

New Jersey as a winter sports paradise? Add it to the tourist books.