The death of NJN and New Jersey's search for identity 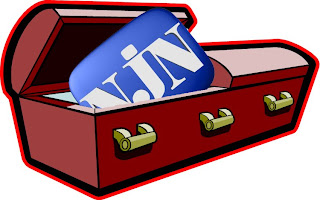 I didn't watch NJN as much as I should have and apparently neither did you. Despite some freshly produced recent programming, Governor Christie announced network's likely fate on Monday.
It's not unique to New Jersey; this is happening all over the country. States are broke and cutting public television is a way to save some cash. Some are cheering the move because they believe the way public television operates is outmoded. They may be right.

Unless the legislature vetoes it within a two-week period, after 43 years of programming, NJN is dead. The network will metamorphose into NJTV, produced by New York's WNET, or as many in North & "Central" Jersey know it, Channel Thirteen. . . you know, that channel Billy Joel mentioned under pressure.
The radio programming gets split North and South: New York Public Radio gets four state owned licenses and Philly's WHYY gets five. The radio side may actually be more profitable, hitting niche audiences with more relevance at a lower production cost.
So New Jersey is now left with two privately owned television networks: Channel 9 WWOR in Secaucus (North) and NBC 40 (South) in the Atlantic City area. And in one way, NJN's demise can be linked to how those channels perform.

Talk to people who live in those areas (I was on both sides for eight years). They're likely watching the New York or Philadelphia channels for news while passing over the more local option. Afterward, their remote controls stay out-of-state for the sitcoms.

Why is this? My guess is that people like to feel they're a part of something bigger. Maybe we think it somehow makes us more cultured, to be on a big city channel. That and they're more slickly produced.

But the death of NJN brings up a bigger debate about our identity in the Garden State.

There is something about Jersey Pride. But many of us still form our identities around major metropolitan areas: North Jersey with New York, South Jersey with Philadelphia and the Shore people tend to wrap their arms around the beach and dread the mainland (or at least anything 5 miles west of them). The rest of us might find something else to rally around: the Boss, a diner or Rutgers football.

But NJN never used its power to unite the Garden State in a way that spoke to the trendsetters, the people who don't just pass on culture, but create it.

NJN never made us cool.

Don't get me wrong, the network had some gems, including Down Jersey, NJ Fresh and other shows dedicated to tourism in the Garden State. One program last year showcased the Jersey Shore as an international tourist destination. It would have been great if that show got more publicity to counteract MTV's view.

But would they have broadcasted this? Or shown this full-length movie?

I don't think so. Or how about New Jersey: the Movie? (clearing throat) Yeah it is happening all over the country and it's all about funding. But if we all loved it, we would have fought harder for NJN.

For instance, look at the success of NJ 101.5 FM. They have done an excellent job since their inception of Jersey centric-branding, their call sign is just the tip of the iceberg. The traffic reports make them relevant and their controversial broadcasting keeps people there. True it's private, and I often can't stand the hosts, but they're very successful.

So New York will run a news incarnation of the old NJN with a reduced staff of only 15 - 20 people working on New Jersey issues. South Jersey will likely be ignored (preserving a historical trend).

So what does the future hold for NJTV?

Well, I have three suggestions:

1) Find a cool NJ town and broadcast from there. (This can be done)
2) Target the young and nerdy.
3) Embrace some of NJN's past, while evolving into the future.

I will separately detail each point in later posts. But whether you loved NJN, hated it or didn't even know it existed, New Jersey lost some of its identity this week. Problem is, it's an identity that's always been hard to find.