5 Jersey Shore reality TV shows that don't exist, but should

With a couple spinoffs resulting from MTV's Jersey Shore, other network execs are likely frothing at the mouth for ways to continue to exploit showcase our state. It appears NJ's time on stage has not yet expired.

But what if there are more chapters in the Jersey reality storyboard still unread that could leave a different kind of legacy to the world?

So television executives looking for that next big hit, I present to you a list of five reality TV shows that would broaden the narrow spotlight on us, while preserving the Jersey Shore as the centerpiece of action. If produced correctly, some serious ratings gold might be achieved.

1. The Other Side of Jersey Shore 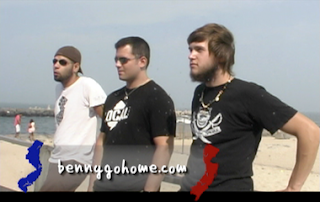 PBS does a great documentary series entitled, POV, showing viewers controversial issues from different sides. This variation would examine the locals who have weathered rowdy crowds similar to the Jersey Shore cast for years, in this case, let's focus on the people at Benny Go Home. Put cameras on this loose alliance of locals and:

Follow their struggles with tourists littering, swelling traffic and the bad behavior we're already used to seeing on TV. They roll their eyes as the police come to break up another boardwalk brawl. They campaign against eminent domain and support independent businesses. They throw a huge party after Labor Day celebrating the end of the tourist season. You may disagree with their philosophy: but I dare you to find one group that bleeds Jersey Pride more.

Hangout: The Wonder Bar during Yappy Hour (Can't we set something there?)
Watchability: 9 - BGH has a healthy relationship with the Jersey Shore Roller Girls out of Asbury Park. While the focus could shift from one group to the other, these two organizations often do events together and embrace the locals tag ferociously. Roller Girl matches would adrenalize any down times. Being set in and around Asbury Park, an added highlight would be the eclectic live music scene.

I've written about New Jersey surfing legend Dean Randazzo before, but it's also important to emphasize Alex DePhillipo's stunning documentary, Dark Fall the movie in which Randazzo and other Garden State surfers are featured. The film could easily be molded into a television format: Follow around these nomadic amphibians during fall and winter. Tension builds every time they check the weather for reports of a Nor'Easter barreling our way. They brace for the news, like firefighters awaiting the call bell.

In addition to seeing these protagonists brave the frigid temperatures of the North Atlantic, the show should also focus on the relationship surfers have with the environment. Many are already stewards of the sea. Learn a couple environmental tips while getting some hot coca and developing a deep respect for what these thrill seekers will do for a rush.

Hangout: The surfers would swap stories at the local Diner, where we could also introduce Taylor Ham Pork Roll to the world.
Watchability: 8.5 Surfers crave challenges. It could make the Jersey Shore a destination for every surfer: You go to Costa Rica in the winter? That's cool; it's like the kiddie pool compared to getting slammed by unpredictable frozen winter waves. Additionally, with Randazzo, DePhillipo and some other common Jersey surnames, it would doubly show that not every Italian American from our state is a member of the GTL crowd.

3. Sand in my Dancing Shoes 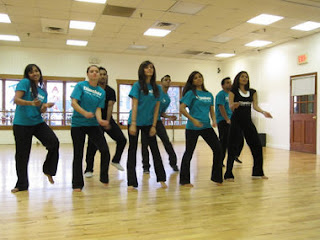 While the Harold and Kumar movies fall into the stoner comedy category, I thought the two actors were more notable for breaking prevalent Hollywood stereotypes about Asian Americans. So why not further shatter that ceiling while showing that New Jersey is actually a very culturally diverse place?

Use the Diwakar Bollywood Dancers: They're young, they're hot, they're from New Jersey and they do more than fist pump. They practice by day and tear up Jersey Shore dance floors by night. The guys came from breakdancing roots, the girls from classical and traditional styles. Some were born in India, most were born here. And then there's Alex, who refers to herself as, "the white girl." Founder of Dance Diwakar, Anil Diwakar, emigrated from India to New Jersey where he met and married an Italian American woman from Passaic County. East meets West with familiar cultural ties that would focus heavily on family, food . . . and footwork.

Hangout: During the day, they'd be at the Dance Studio or eating on Oak Tree Road, USA. They'd hit up the Jersey Shore clubs at night. Bollywood dancing is very physical, so a nice twist would be to see if their athleticism could also translate to the beach volleyball courts.
Watchability: 9.5 It's true that Outsourced, failed on NBC just after one season, but this is about Indian Americans from New Jersey. This show has the versatility to include permanent judges. Maybe native Garden State son, Kal Penn, makes a couple appearances? Or maybe, like Jersey Shore going to Italy, they travel to India and compete giving the show the strongest international flavor? I was impressed enough, I'm likely signing up for a winter class

4. The Real Lifeguards of the Jersey Shore 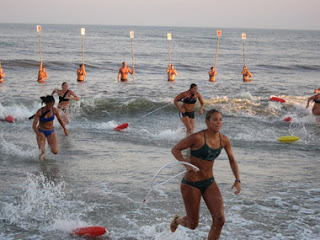 It's fine if you imagine this as a New Jersey Baywatch, but it's much, much more than just chiseled tan bodies in the summer sun. These Jersey Shore lifeguard races are fiercely competitive and over one hundred years old (take that California). Stone Harbor captain, Sandy Bosacco, told me, "Many of these lifeguards are former division I and III athletes. It's intense."

Cameras document the initiations of freshmen lifeguards, the grueling training trials and feature the veteran lifeguards who compete in local, regional and national tournaments.

I'm betting many lifeguards find summer romance together; walks on the beach at sunrise would get our hearts racing.

Hangout: A Jersey Shore Bar/ Restaurant with a cool outdoor deck. Bonus if it has a colorful grandma-like owner who treats the lifeguards like family.
Watchability: 7 You'd have a very attractive cast, but because they are public employees, it would be tough negotiations with a town to follow off-duty lifeguards out to the summer bar scene. But maybe we could just concentrate on the sport of it all? It would be good for families and promote healthy living. More action photos and some videos here. 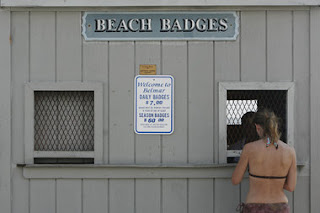 Follows the courageous men and women of the New Jersey beaches who put their life on the line every day selling and checking beach badges. From the sweat box sellers (it gets to about 110 degrees inside those little outhouses) to the men and women walking the beach checking to make sure everyone has paid their $8 to use the usually free sand and ocean. In an early episode, all hell breaks loose when someone accidentally writes the wrong water temperature on the chalk board and Sally over on 5th street runs out of singles before 10am! 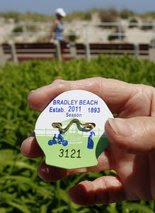 Hangout: City Hall
Watchability: 10 Before every Memorial Day weekend, the mayor or captain to deliver the best motivational speech to beach badge patrollers will produce a video with the potential to go more viral than Jim Mora's famous 'playoffs' press conference. The end of each episode would be a slow montage of outsiders' reactions once they find out they have to pay to go on the beach, all set to AC/DC's "Money Talks."

The current offering of Jersey reality shows is like being stuck in the frozen foods section. Time to give audiences access to more than one aisle of the Garden State supermarket. Each of these shows has immense potential. Writers, if you develop something similar and it's a hit, please just add my name to the credits. If it flops, a maid in my hotel wrote this.

High fives to Chris Illuminati; Eli Kazin and Derek Tagliarino for the "watchability" inspiration and 95 Sports for the AC/DC idea.