I love living in Lambertville. It's a walkable town, where I can park my car for the weekend and never move it. There is an assortment of great restaurants, coffee shops and art galleries.
It's got the old time charm with antique shops, cool historic houses and a hopping Halloweenville.
It's far enough north of Trenton to not be included in many people's dividing line, but far enough west to provoke debate.
But there is one thing I haven't gotten used to here and in the surrounding areas:
The time it takes to make a breakfast or lunch sandwich. 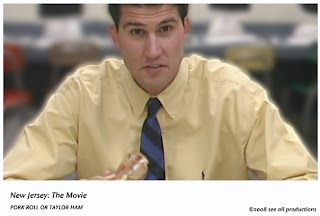 After living in North Jersey for 6 years, I have become preconditioned, and may never be able to go back.
In Hoboken, every morning I got coffee and a sandwich at JP's Bagel Express and was in and out in a flash. In Maplewood, it was Bagel Chateau. I grabbed some grub and had just enough time to talk to the local fixtures about the NFL scores, trades and predictions for the week.
For lunch, I've been pampered by Millburn Deli. It's the most unbelievable delicatessen I've ever been to in my life. During busy times, you take a number and are still served quickly. Order a Gobbler and you'll be greeted like Norm from Cheers. Or go on Thursday where the staff are wearing wacky hats.
During my South Jersey days, I never got a deli sandwich so fast. One exception was the White House Sub Shop, but that is a tourist fixture and caters to a busy lunch crowd. So it's true, staffing size and proximity to a city matter. They can cross geographic or imaginary boundaries.
However, the slow and sometimes excruciating wait times around here got me speculating. One of the biggest things people told me in New Jersey: the Movie interviews was that South Jersey was slower than North Jersey. However, many could never elaborate on what that meant.
Could it have been service time at delis?
Go ahead try it. Get a stopwatch and time your deli during a lunch or breakfast rush. Tweet it to me or post a comment here. Will we see a pattern?
As someone who is on the cusp on the Internet/ texting/ instant gratification generation, this may matter to many businesses bottom lines in the future . . .
Posted by Steve at 3:51 PM

In South Jersey, the analysis is confounded somewhat by Wawa. Many people use the nearest Wawa as their default deli. And Wawa is quick. In fact, their ordering system is now automated, eliminating the need to "take a number" - it's truly a first-come, first-served system.

You may wish to remove Wawa from the comparison so as to focus on the more "authentic" experience of the corner deli, butin doing so you'd be excluding a seriously large percentage of all deli sandwich-ordering experiences in the southern half of the state!

I cannot disagree with anything Tim said. But if we remove the Wawa equation, what is left in South Jersey? Now THAT would be a fun map. Find areas out of reach of a Wawa for 5 miles and check out the places.