Posted by Steve at 6:26 PM 2 comments: Links to this post

In New Jersey: the Movie we documented the TV differences in the state.
However, we missed a channel specific divide. We'll call it: the Uncle Floyd - Captain Noah line.

For instance, in North Jersey, most people have very fond memories of Uncle Floyd Vivino.
In the early years of cable, and even on my old antenna TV, we could get The Uncle Floyd show in Mercer County. My father absolutely adored the man; and watching his show became something of a family ritual in our household that would only be rivaled years later by Fox Sunday Nights with The Simpsons and In Living Color.
The years have passed, but when Uncle Floyd announced his run for New Jersey Governor, my dad immediately emailed me from Arizona, where my parents live now, to make sure I considered him as a write-in vote. 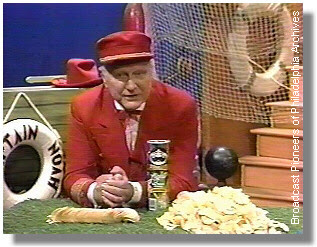 Turning the rabbit ears south, in the past, many kids in PA and South Jersey ritualistically turned their TV sets to Captain Noah on their local network affiliates. Captain Noah was more of a children's show compared to Floyd's, and because dad didn't watch this - I really don't have any memories of Captain Noah.
More familiar to me was the musician who scored the show, Larry Ferrari, because he played at the Ewing fireworks every 4th of July. But the Captain's set still lives on at the Please Touch Museum.
However, I do have a clearer Philadelphia/ South Jersey TV family tradition.
Every New Year's Day, our household usually tuned into a Philadelphia affiliate and watched the Mummers parade. Especially since my father was stationed for a time in Philadelphia's Naval Yard, this was a big deal. I even attended a wedding where Mummers dancers were part of the entertainment.
I often wonder if we still lived in our old house today, if our family would watch the Mummers or the Winter Classic.

As for the divide?
Ask someone from North Jersey who Captain Noah was or what the Mummers are, you'll likely be met with blank stares.
Ask someone from South Jersey if they remember Uncle Floyd (even though he was syndicated for a short time on Channel 29). Unless they have a relative up north . . . they probably won't know either.
Don't believe me? Go ask a friend or a colleague now. But make sure they're over 30, or they'll probably have no idea what you're talking about:
It was pretty cool growing up in Mercer County, NJ in the 1980s and 1990s and getting all four network affiliates on basic cable: NBC, ABC, CBS & FOX from New York and Philly. And it probably contributed to this NJ identity complex that I have.
If you grew up in Sussex, Warren, Hunterdon, Monmouth or Ocean counties, I'd be especially interested to hear your experiences on the Uncle Floyd - Captain Noah Line.
Posted by Steve at 2:53 PM No comments: Links to this post

Posted by Steve at 9:50 PM No comments: Links to this post